So seats were awesome. First allocation we got was on the try line. Emailed and enquired about anything better and got reissued on the 10. Much pleased.

Stadium brilliant. All seats looked to have a good view. Pretty easy to get around prior to kick off. No queue for food (only bought two cartons of chops - reckon they might have only charged for one as it only cost $6), and three people for beer. (Two XXXX Golds and two Bundy & cokes go Mrs Boo- one of which I ended up drinking - $38. Was sufficient to see us through the game remaining compos mentis with no need to get out for comfort stops.) 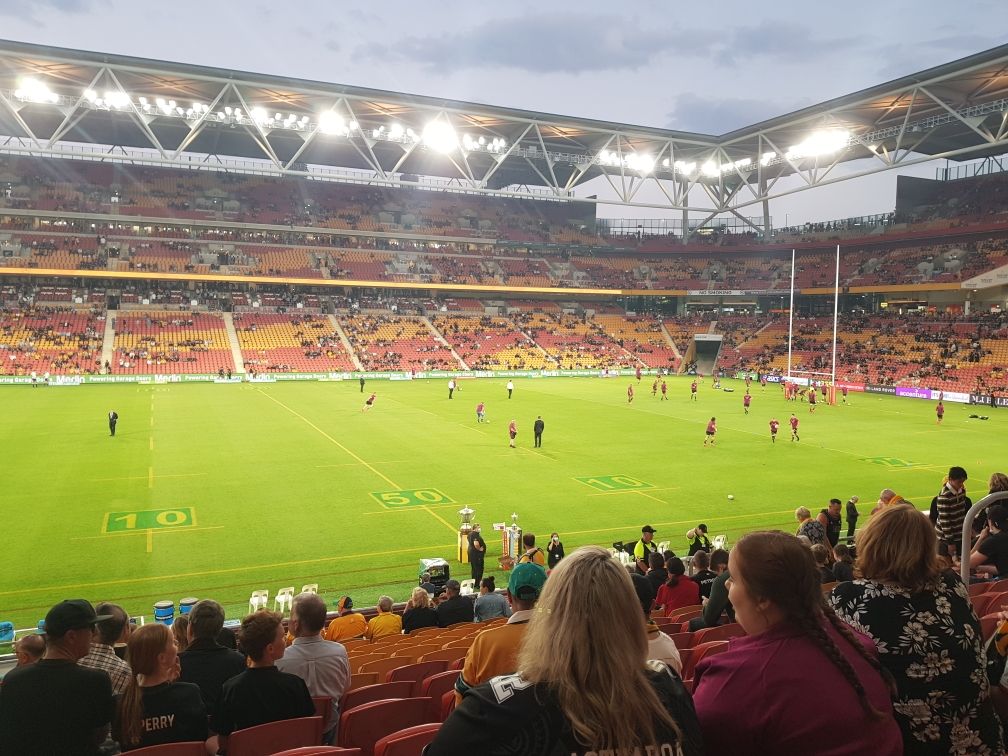 Surprised at the access to around and from the Stadium. Lots of road closures and diversion and rat runs. I don’t recall even Eden Park being that level of disorganised outside the ground.

Crowd atmosphere was pretty much the best I’ve experienced. Seemed at least 50/50. Not a bad size either but enough gaps to make moving easy enough. Good natured, despite the niggly game , and both sides had reason to cheer.

But the incessant bloody music! First time I’ve been to a game for five years and I don’t recall it being that bad last time.

I also don’t recall buying tickets to a disco.

Several times there was good lead up work, crowd getting into it, maybe a kick to a corner with attacking lineout (one team or the other) and then DOOF DOOF DOOF. Way to kill an atmosphere. Or they’re still blasting out some tune 10secs (a long time in sport) after kick-off.

Some of it was good. The rest of it just drowned out the atmosphere.

But enough of that rant.

On to the game. I’m not very good at remembering the intricacies of a game at the best of times, so the following are just general observations.

I did start browsing the match thread last night, got about as far as half-time so will be an interesting exercise to see if my opinions match with the general feel of TSF.

I’m over us giving away penalties. The Wobs first try came from a penalty that gave up possession and territory, after that all they needed was a lucky bounce and presto! Five points.

Bigger discussion point here but I am beginning to think the desperate need to retain possession is not balanced by the consequence of a penalty.

Will need to watch the recording but thought Ofa’s red was deserved. First viewing from the stand looked ok but the shots from the reverse looked bad. Quick peruse of the forum suggests there may have been mitigations that weren’t fully factored. Will have to check.

Shame they had to drag Akira. Looked like he’d been going well.

Missed the Swinton red live but lucky it was only a red.

Game didn’t have a lot of shape from my viewing, especially after the cards.

Not sure about the obsession with the rolling maul just prior to half-time. Wondered if we shouldn’t have had a crack wider.

Thought we missed a couple of chances on the outside, particularly in the second half. I think ALB went himself once, and Jordie could have passed to Rioane once. Maybe not full on overlaps but felt there was some space out there.

Beaudie put in a couple of awful kicks.

As Jordie was calling for the quick throw in from Reece I could see Wellington all over again. Came close.

Reece wasn’t up to much.

Not a fan of SB, don’t see him adding much.

Maybe we made a few too many changes?

We need to clone Aaron Smith ASAP, or find a different way to play.

More thoughts on the thread as they come.

Am now one and one for tests attended at Suncorp.

All up a great day apart from the result. Will be back again. Maybe not this package - will take a chance of purchasing tickets, and do a cheaper hotel.