Next day match report from the stadium

HTown was great fun. What an awesome day out - in the sun, charcoal lamb rotisserie at a mates, helped smash a keg of beer, and then down to the ground. FMG is one of the good rugby watching grounds in the country (proper rectangle; NH and Dunedin are in the mix), but fark me the crowd was all over the place. People are just up and down all the time, don’t care what’s happening on the field, and the low angles mean it’s really easy to have the view blocked.

On the other hand, vocal, and 7 pitch invaders (!) so ya get that. @NTA no issues yelling at the kicker, Ireland can do the quiet, people can do whatever they hell they want at the ground… it’s more our mindset than rule following.

That said, we were about 2 rows away from being in the rain, so happy times 🙂 First time in teh stand, normally we like to stand in the green zone, but got lucky getting seats with the weather.

So, ABs were very clinical, very accurate, and low error rate. The chip is a legit tactic to find space against the rush; you could see why it was being done. Sometimes worked, sometimes didn’t - but the threat of the little dink puts people in two minds, and that slows down a defensive line.

Forward pack were sensational. Really committed and dominant. ST a monster, rest of the tigh went well. Set piece was strong. Loosies good, and particularly Sam Cane who monstered people all night, and actually linked and got aroudn the paddock well. Good work. Ardie played the Savea position again, and Fritzel got into plenty of work in the dark spaces. Cane was amazing I thought, particularly with the weight he has carried

Aaron was good, but got run over 2-3 times in defence. Noticeable that his box kick was going for length from the 22 - and it generally worked to exit us to about the 40. His pass was sweet. RM was a mix … some really good stuff, but also some brave Test match decisions. Still small… which goes to the downside of Havili - his size. He’s not a bail out option, and with Smith and Mounga that’s quite undersized inside backs. Played well, some smart decisions, but at risk of getting ragdolled on both sides of the ball. That said, (like at 6), picking someone and sticking with them is better than chopping and changing … that led to 2019 and no idea about our midfield or 6.

Rieko was sensational. Pace, skill and positioning. His defensive work is very strong and folk often don’t see it. His pace is sublime, and turning that argie inside out for his try was magnficent.

Will Jordan seems very off, and has a hgih error rate. Would see Reece there instead. Clarke was solid on kickoffs (most went to him), did his best to hurt people when running, but otherwise didnt’ see a lot of ball. Jordie isn’t what he was, but seems more likely to bring his A game. We were talking about it - I’d take Jordie over Jordan because of teh defence, the punt and the aerial skills. Jordan with ball in hand at lower levels is sensational … but struggles to put that out there in tests against good opposition, particularly this year.

Honestly, the abiding memory was the backs actually doing something - and the accuracy rate through the roof. The last try was sweet; we’d run the Jordie play onto the ball earlier, so ran the same play with a different option. Was bloody good to watch. So fair play Foster, I thought you should have gone a long time ago, but string some of these performances together and I’ll have to eat humble pie.

Good fun, lovely day out, the newish expressway makes getting to HTown so smooth. 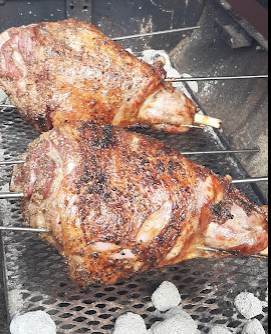